InfoComm Orlando is the largest professional AV exhibition in North America, and it attracts more than ten thousands of visitors and over 900 exhibitors every year. AOTO Electronics will showcase the industry cutting-edge products at this upcoming audio-visual feast from 12th June to 14th June. 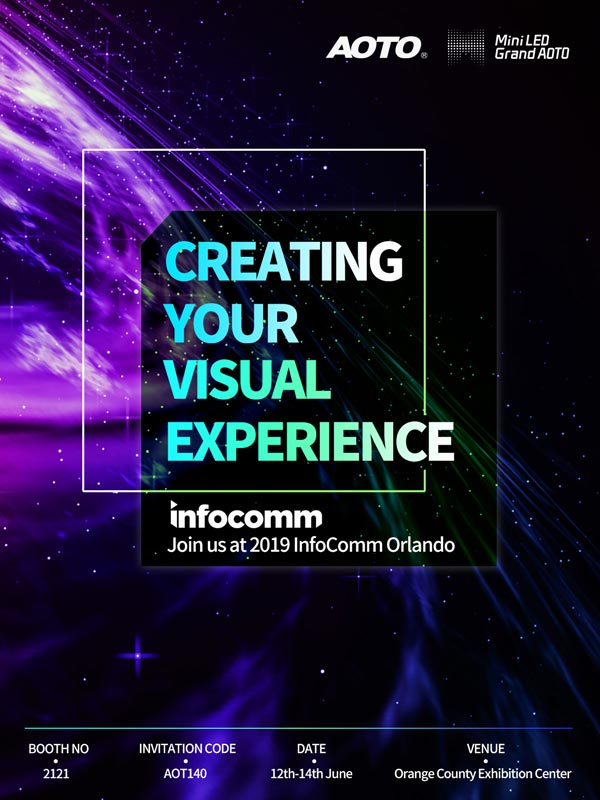 Looking back at this year’s ISE show, AOTO Electronics exhibited ‘the world's largest 8K Mini LED display ‘with the resolution up to 7680*2160, and the 8K controlling system of the display was also exclusively developed by AOTO, which caused a huge sensation from the industry. What needs to be focused is that this so called ‘Exhibition Star’ will be shown on the stage at the upcoming InfoComm Orlando.  Let’s us to expect what it will bring to the North America!

What is more, AOTO will bring other series of Mini LED products, ranging from the stand-alone and splicing to high-end rental. All these products can be applied to conference room, control room, and event etc.  Also, AOTO’s new Mini LED products will be officially released at the InfoComm Orlando, it is said that this new product will shake the industry landscape and lead a new era of LED display.

Meet us on 12th June, 2019 InfoComm Orlando. AOTO Electronics will surprise you!