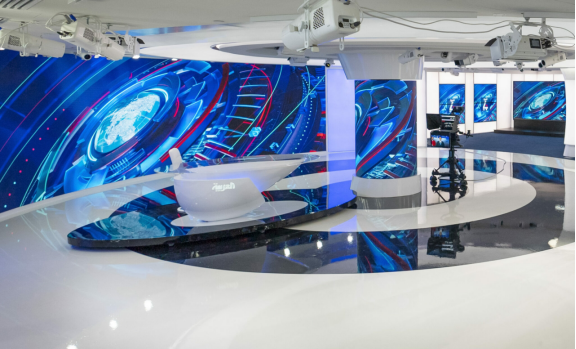 AOTO LED displays were selected for the project, provide the studio with the premium picture quality, innovative design and reliability needed and take the studio to the next level. The studio digital installation consisted of 1.8 AOTO CLD series LED screen with a 4°curved, covering a whole side video wall, a pillar screen of C 1,5 and a customized touch screen stitched with CLD1.5, making the studio one of the modernist studios in the Saudi.

The huge digital canvas can be used as a news wall that enables dynamic content to be presented on the wall at a high enough resolution, also allows the presenter to have a much more engaging experience during the show.

AOTO LED displays feature sleek, modern design, as well as high-performance. When it comes to virtual on-camera production, the moiré effect and pixilation are commonly visible on the screen. AOTO fine pixel pitch led product effectively solve this issue, as the camera can capture all of the information on the screen very clearly and vividly, both when stationary and while moving, even when in close proximity to the device. Clearly shot on-set can be translated accurately to audiences watching in their homes.

Overheating is a common occurrence in a brilliantly illuminated television studio and a small space setting that is sometimes crammed with a variety of supporting equipment. The low heat production and excellent heat dissipation of AOTO LED products, together with the elimination of noise, ensure that people are not uncomfortable when working in the studio.

Our partner is very satisfied with the quality of the video wall as well as the reliability, ongoing support and maintenance provided by AOTO. The LED video wall system is extensively considered by the virtual production industry as the leading